Today on the blog I have the privilege of sharing some writing by Rachel Hauck! Rachel writes Christian fiction with Thomas Nelson and Zondervan, and she has a great newsletter that I’m subscribed to.  Recently, I received a newsletter from her and absolutely loved what she had written, so I contacted her to ask if she would let me share it with you all today, and she agreed! 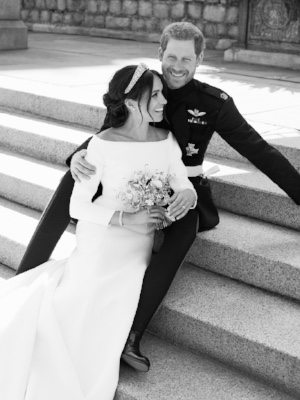 Going on three hours of sleep, I was up at 2:00 a.m. Pacific Time to watch American actress Meghan Markle marry Prince Harry.

I’d traveled to Reno for a readers convention and even though the hour was early, I determined to watch the royal wedding live!

I texted with my mom and friend Beth Vogt the whole time.

The wedding was lovely with a casual yet elegant feel. The preacher from Chicago raised a few royal eyebrows, and I loved it!

Despite the glitz and the glamour, and having 29.2 million American viewers alone watching the wedding, I imagine it felt a bit overwhelming at times.

But now the hype is over and the marriage begins! The day in and day out, the reality of “this is your life now” takes hold.

Relationships demand being yielded to others. It calls for servanthood and self sacrifice.

In Meghan Markle’s case. it demanded her whole life. She had to give up her career, her home, and her entire identity as an American actress to marry Prince Harry.

It’s easy to think how grand it would be to marry a real prince. To live on the global stage. To give your time to charities and causes you deem worthy.

But at the end of the day, it’s just Harry and Meghan in their Kensington cottage building their lives one day at a time.

But what did Meghan get in return for her sacrifice? Love, of course! To give love and be loved is the highest treasure in life. We cannot live without it.

But she also got Harry’s name. His royalty. She became a “Her Royal Highness.” A Duchess. (She’s not a princess. She had to be nobility to be promoted to princess.)

She married into a global family with the opportunity to do much good.

She readily accepted the privilege as well as the restrictions and guidelines that go with becoming a British royal.

Her life is no longer her own. If she had the itch to return to her old life, she couldn’t.

But what a beautiful living picture of who WE are in the kingdom of heaven.

We are commoners married into the kingdom of heaven by the love of the Cross.

When we are “born again” into this kingdom, we give up our old life. We are no longer [fill in the blank] because we have accepted a proposal from the King of Kings.

He gives us His name and access to the Father. We have a global stage to affect change in our world!

Revelation 8 paints such a picture of the power of prayer.

Another angel came and stood at the altar, holding a golden censer; and much incense was given to him, so that he might add it to the prayers of all the saints on the golden altar which was before the throne. And the smoke of the incense, with the prayers of the saints, went up before God out of the angel’s hand. Then the angel took the censer and filled it with the fire of the altar, and threw it to the earth; and there followed peals of thunder and sounds and flashes of lightning and an earthquake.

Our prayers shake the heavens and the earth!

We are royalty, standing before the Throne of Heaven. We are citizen of another kingdom.

Yes, we give up things to walk with God. But we are given so, so, so much more in return.

We are given His name.

Meghan Markle felt the love of Prince Harry was worth giving up her world. In exchange, he gave her his name, his title, his royal heritage and privilege.

The love of Jesus, demonstrated on the Cross, is well worth anything and everything we give up to “marry” Him.

In that light, how will He not answer our prayers?

Romans 8:32. “He who did not spare His own Son, but delivered Him over for us all, how will He not also with Him freely give us all things?”

Why would we want to return to our old life, our old self, our old ways?

We are royalty! Let’s endeavor to live, love and serve like we know it!

You can find Rachel at all of these places!

And be sure to check out her latest book here!

Buy me a coffee

I'm a writer who publishes my thoughts on the life I'm living, literature I'm reading, and God I'm serving. Psalm 27:4 One thing I ask from the Lord, this only do I seek: that I may dwell in the house of the Lord all the days of my life, to gaze on the beauty of the Lord and to seek him in his temple.

View all of Callie Susanna's posts.

Welcome to my blog!

This blog has evolved over the past eight years to not simply reflect my tastes in reading, but to also follow my journey as I grow in Christ. I strive to help you all not only find good literature, but also find encouragement for your Christian walk.  I also share anecdotes from my travels throughout the country!

Want to Support Me?

Are you an animal lover?

Check out my sister’s blog, all about pets!